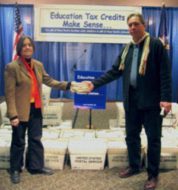 Back in January (2006) I was able to attend a weekend workshop on Waldorf Education and Social Renewal  at the City of Lakes Waldorf School in Minneapolis, hosted by the Novalis Institute and featuring Gary Lamb of the Institute for Social Renewal.

I first met Gary when our family lived (briefly) in Harlemville, NY about 9 years ago, and subsequently subscribed to the magazine which he co-edited, The Threefold Review (the Institute for Social Renewal has a few articles from the magazine, which is no longer published, up on their website). I always appreciated Gary’s clarity and  in particular his clearly articulated position that government should not rightfully be in the business of providing education and that Waldorf education is best served by steering clear of the State.

Gary has dedicated himself to exploring the apparent conundrum of having Waldorf education be both indepedent of the State and accessible to all. This was an important part of what Gary had to say during this weekend. Towards the end of the weekend Gary pointed to Educational Tax Credits as a practical step toward this goal. He is personally involved with the campaign in New York State to create such a possibility (see www.teachnys.org). The picture to the right shows Gary with Patrice Maynard of AWSNA – the Association of Waldorf Schools of N. America. (This is taken from a report about the tax credit campaign in the latest issue of the Institute for Social Renewal’s e-mail newsletter: subscribe here).

So, Gary’s essential thesis was that Waldorf education originated in and cannot be separated from “social renewal”. He talked about the founding of the first Waldorf school in Stuttgart, Germany in 1919 for the children of the Waldorf-Astoria cigarette factory workers and developed a discussion of Rudolf Steiner’s views of social renewal and his conceptualization of the threefold nature of human society, whereby a healthy balance is found between the economic life (keyword: fraternity, brother/sisterhood), the political/legal life (keyword: equality) and the ‘spiritual-cultural’ sphere (keyword: freedom). Following Steiner, Gary firmly placed education in the spiritual-cultural sphere (along with art, science and religion) and described the need for all education to be free from the control of both economic forces (primarily big business) and political forces (the State) – not just Waldorf education.

Gary described a positive role for the State in ensuring the right of all children to an education but he feels that we badly need to unhook that concept from the idea of the State providing education through government schools. Similarly businesses have a part to play in funding education but only in the context of educators (in the classroom) having the authority to decide what the children they are working with need.

I thought that Gary was really inspiring when he described Steiner’s view of Waldorf education (or, really, any true education) as constantly evolving, depending upon the changing needs and nature, not of the government or business, but of children. Steiner essentially said that if one is teaching exactly the same way one taught even five years ago one is not meeting the real human beings in front of one. This is why state-mandated curricula and standards are a nonsense.

Robert Karp, who had come all the way from Milwaukee, suggested that modern children’s paramount need might be an education that has a therapeutic nature and that this side of Waldorf education may need to be further developed and emphasized.

There were a couple of us Waldorf homeschoolers present at the workshop. Laurel pointed out that homeschooling very much stands in the stream of education independent of state control, though I expressed concern that ‘virtual academies’ and ‘home-based’ public school initiatives represented a dangerous blurring of the line between homeschooling and state-controlled education. (This is why Christopherus Homeschool Resources signed the ‘We Stand for Homeschooling’ resolution a couple of years ago.)

Gary described a situation – the latest step being No Child Left Behind – of increasingly centralized and big business-driven public education. While Gary chose during this weekend not to address the issue of Waldorf Charter schools and ‘Waldorf methods’ public education, it was clear that he feels this is not the time to compromise on the ideal of education free from political control.

Gary also had interesting things to say about the governance of Waldorf schools in relation to threefolding. He feels that most of the serious problems in the Waldorf schools in the US are issues of the middle, ‘rights’ sphere (justice, fairness and how things are done) rather than problems of pedagogy or funding. However, he did say that the struggle to adequately fund Waldorf schools is a big strain as well.

I was left with questions around ‘social renewal’ in the 21st century. Although basic social inequality still exists as it did in 1919 it is now generally accepted that all children deserve an education worthy of a human being (even if one considers that public education doesn’t provide that), which was one of Steiner’s foundational principles in creating the Waldorf school (as was the co-education of boys and girls which is now also the general rule). Perhaps we can say that in all areas of social life we need creative, free-thinking and compassionate individuals and that Waldorf is precisely working to that end in the education of young people.

I was also left wondering how his model of intersecting spheres within a Waldorf school related to our high school in Viroqua, the Youth Initiative High School, with its much greater level of student participation in governance than in other Waldorf schools.