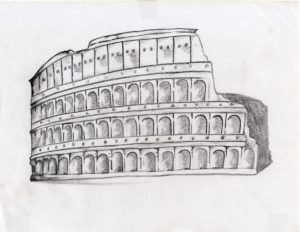 Today I finished a three week main lesson at the Waldorf-flavored high school where I teach part time. It was a class with the juniors and we spent three weeks galloping through the centuries from the Fall of Rome to the year 1900. That’s a lot of history by any stretch and a ridiculous amount to cram into one little three week main lesson! But  one of the peculiarities of this school is its three week main lessons, so one learns to adjust!
And because Waldorf is concerned with the “economy of teaching”, of the “symptomatic approach” to history, one does not need to fret that one has not covered every country, every battle, every historical event of note. Instead, one works with a wider sweep, searching for themes that move through historical periods and then broadly outlining the lives of people or events which took place which are symptomatic of that change.
And so, after a quick re-cap on the Fall of Rome and the next 800 or so years ( they had had a block last year which went to the early Medieval Age), we slowed down to get a sense for the essence of the Medieval Age in Europe – what was it about? How did people live? How did the people view themselves and the world? We then moved on to the Renaissance and took as a theme, what are the differences between the Medieval Age and the Renaissance? We didn’t have to cover every fascinating person – we touched on Joan of Arc, on Henry the Navigator and Marco Polo, Ghenghis Khan, Galileo, Leonardo da Vinci and others – as typical of that time period.
Then we looked at Muslim Spain – at the great cultures there. We doubled back and remembered what we’d learned about Haroun al-Rashid and Charlemagne and also about the Crusades. Now we turned to Spain and to Ferdinand and Isabella and their religious fervor and the destruction of the Muslims and Jews – and how this paved the way, monetarily, for Columbus’ journey to the “New World”. And we did not forget to mention Cortes, who gained his experience in killing in Spain before he perfected it in the world of the Aztecs. (an extraordinary novel set during this time is Shadows of the Pomegranate Tree by Tariq Ali – for adults or mature older teens).
Here we then also get a sense of connections – of world and cultural karma if you will. The students marveled at the fact that Haroun al-Rashid (ruler of a great Muslim empire from 763 – 809) and Charlemagne (Frankish ruler, Holy Roman Emperor at roughly the same time) actually discussed an arranged marriage between Charlemagne and as-Rashid’s sister! What consequences might that have had for history and for the relations between the Muslim and Christian worlds had that happened! And again, we marveled at the chivalry of the exchanges between Saladin and Richard the Lionheart during the Crusades – Saladin actually sent his personal physician to treat Richard who had fallen ill. Well, once he was better the battle could commence… And so it did.
Moments from history give us all pause to think. And greater sweeps of history, of examining the differences in people’s consciousness and how they change from one historic period to the next also give us a lot to think about. What about the fact that as the British Empire began to grow after the defeat of the Armada, that Japan, half a world away, entered its isolationist period, effectively closing itself off from the rest of the world? What ramifications might that have had for us all?
And so on. Our block was very exciting and wide ranging.  We touched on many topics, including the rise in rationalism, the Protestant Reformation, the Industrial Revolution and the true beginnings of globalization with the development of capitalism….And we spent time looking at the ideas of the Enlightenment and how they influenced not only the French and American Revolutions but also the formation of Haiti and men like Toussant L’Overture. I was keen to ensure that the students realized that such ideals spread far beyond European culture.
I love history – I love the stories of humanity and all the twists and turns and interconnections of the individual and society. My students were also excited and, most importantly, felt that ‘history’ had to do with them.