Highlights and Challenges of 7th Grade: Geography ( Focus on Africa) 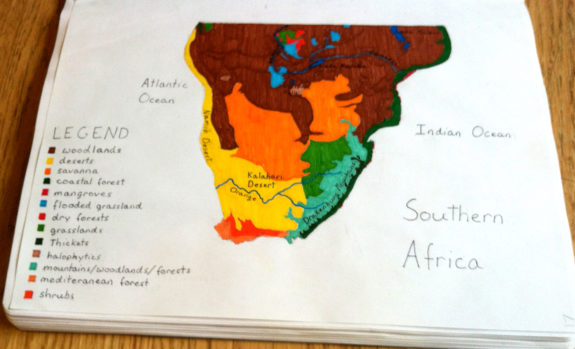 In Donna’s  A Rough Guide to Seventh Grade, she states that” this year’s focus is on Latin America, Asia and Africa.” (12). That is a lot of geographical ground to cover! There is also an emphasis in this grade on making sure that longitude and latitude are understood and the child can effectively read maps. She also suggests highlighting some of the ancient history of these areas and recommends Hear the Voice of the Griot as the primary reference for African geography.

I have worked with several small co-op classes for the study of geography and I think that these main lessons work quite well in a co-op format where an individual child can research a particular region and give a presentation to fellow students. However, even if you are working individually with your child, the study of geography is an important main lesson that connects well with the history and science lessons for this year. I do recommend that the basic geography main lessons are covered prior to the science and history lessons that relate to them (  for example, study the geography of South America prior to the Age of Exploration main lesson). In all geography lessons, it is important to first have a real sense for the physical regions and ecosystems of the land. The nature of the land itself and its natural resources shape how the human beings live culturally, economically and politically.

The study of African geography can be daunting for some parents, especially if they have had little exposure to it themselves in school. Hear the Voice of the Griot  (hereafter “Griot”) is a fantastic book and it does an excellent job of weaving geography with rich cultural and historical explorations into this vast land. I would like to share below one approach to working with a few key parts of the book for use in the geography main lesson on Africa.

Brief Outline for a Main Lesson on Geography of Africa

Chapter one of “Griot”, Longing For The African Land, explores the forms and features of Africa, crossing the continent in journeys from west to east and then north to south. Also see Section Three, Regions of Africa.( 109-174). The idea here is to explore each large geographic region of Africa and create a series of  free hand maps of at least two of the regions. These are physical geography maps and should carefully show eco-regions, terrain, mountains, lakes and rivers. The great river basins are the Nile (empties into Mediterranean), the Niger (empties into Atlantic just north of the equator) the Zaire which drains central Africa (empties into the Atlantic) and the Zambezi which empties into the Indian Ocean. Make sure your child understands the definition of eco-region: ” a large unit or land or water containing a geographically distinct assemblage of species, natural communities and environmental conditions” ( World Wildlife Federation).

In our small co-op, I divided the regions into (1) North- from the Mediterranean coastal strip through Atlas mountains, south to the Sahara Desert , then to the steppe, then the savannah (sudan) and merging into the grasslands, including Lake Chad, the Ethiopian Highlands and the Great Rift Valley on the western edge. (2) Central-the great rainforest where the grasslands wrap around the rainforest of Zaire Basin and Angola; also included the Congo River and high mountains. (3) South- south of the rainforest is almost a mirror of the north, moving into the savannah and dry scrub forest, the Kalahari Desert and the Drakensburg chain of mountains. The southern tip is the Cape of Good Hope and the island of Madagascar (see page 6 of “Griot”). Each student took a region to draw and explain to the class.

These maps do NOT include the political boundaries of nations. Aside from “Griot” you will need to consult maps of Africa that clearly show eco-regions. One source I used was worldwildlife.org/science/wildfinder, Click on the African eco-regions theme. You will also be able to highlight characteristic wildlife examples of the eco-region. Distinctive eco-regions should have a distinctive color.  A regional map of Africa will have more than one eco-region. These maps are not so easy to do ( especially the central portion) and parent and child will likely need to work together on research and drawing.

After the regional maps are completed, the child should pick one region and write a two to three page report for the main lesson book, describing the region’s terrain (including distinctive landforms and water), eco-regions, climate (especially rainfall), and some highly characteristic animal and plant species, noting how they are uniquely adapted to their environmental conditions.

This lesson week corresponds to Chapter 4 in “Griot”, Prehistoric Africa. I chose to focus on African rock paintings in my co-op class. Different regions of Africa had different styles. I had my students create a rock painting  (either on a rock or a piece of paper) that was from one of the distinctive regions. The greatest number are in northwest Africa and southern Africa. The students also wrote a paragraph into their main lesson books about the region and site of the rock painting and its time period, if known. I also gave a spelling quiz on the following words: equator, Lake Tanganyika, Mount Kilimanjaro, plateau, Drakensburg Mountains, Kalahari Desert, Sahara Desert, Zambezi River, Congo River, Niger River, baobab tree, precipitation, Madagascar. 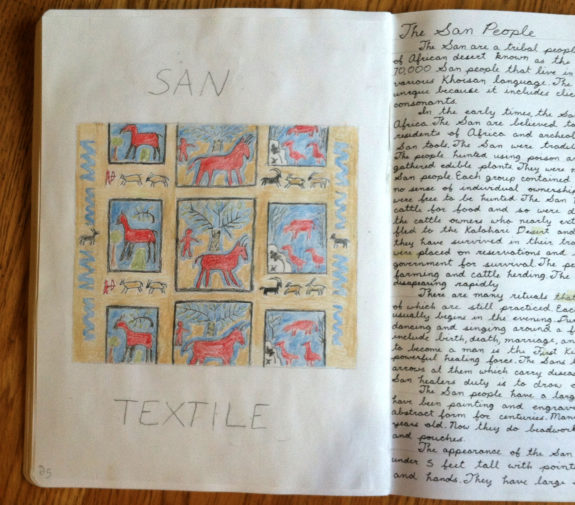 This week the focus is on cultures of different regions. You and your child can read in the  “Griot” book about  history and culture in the regions. Each of the co-op students in my class picked a distinctive group of people in their region and included their history and culture. They spent the week writing a three page paper covering the following points:

1. Who are the_________? This part should be at least three paragraphs, including an introduction, location , population, language and brief history of the group being studied.

2. Cultural life of the___________ people. This part should include spiritual beliefs/myths, rituals, festivals, art, music, dance and distinctive dress or body markings.

3. The work life of _____________. This section should include the natural resources/agriculture, industry and products of the studied group.

Your child can also create some kind of artistic representation of the group including re-creating a piece of art or drawing of a textile, singing/playing a song, or telling a story that helps someone understand the culture of the chosen group.

Each student in my co-op class did a modern Africa two page report on a country in their region and a map of the country with a legend key. Each report contained the following information:

Each student also prepared an authentic food dish from the country which we shared at a presentation for parents at the end of the week, along with presenting all the main lesson work done on Africa. We also practiced and performed the national anthem of South Africa.( see “Griot”, 352).

If you and your  child have time to do this fifth geography week on modern Africa, I think it is a very valuable way to bring the main lesson into a focus on a modern African country.

This main lesson on geography of Africa was one I deeply appreciated and enjoyed teaching..