Many years ago there lived an emperor who loved beautiful new clothes so much that he spent all his money on being finely dressed. His only interest was in going to the theater or in riding about in his carriage where he could show off his new clothes. He had a different costume for every hour of the day. Indeed, where it was said of other kings that they were at court, it could only be said of him that he was in his dressing room!

One day two swindlers came to the emperor’s city. They said that they were weavers, claiming that they knew how to make the finest cloth imaginable. Not only were the colors and the patterns extraordinarily beautiful, but in addition, this material had the amazing property that it was to be invisible to anyone who was incompetent or stupid.

“It would be wonderful to have clothes made from that cloth,” thought the emperor. “Then I would know which of my men are unfit for their positions, and I’d also be able to tell clever people from stupid ones.” So he immediately gave the two swindlers a great sum of money to weave their cloth for him.

They set up their looms and pretended to go to work, although there was nothing at all on the looms. They asked for the finest silk and the purest gold, all of which they hid away, continuing to work on the empty looms, often late into the night.

“I would really like to know how they are coming with the cloth!” thought the emperor, but he was a bit uneasy when he recalled that anyone who was unfit for his position or stupid would not be able to see the material. Of course, he himself had nothing to fear, but still he decided to send someone else to see how the work was progressing.

“I’ll send my honest old minister to the weavers,” thought the emperor. He’s the best one to see how the material is coming. He is very sensible, and no one is more worthy of his position than he.

So the good old minister went into the hall where the two swindlers sat working at their empty looms. “Goodness!” thought the old minister, opening his eyes wide. “I cannot see a thing!” But he did not say so.

The two swindlers invited him to step closer, asking him if it wasn’t a beautiful design and if the colors weren’t magnificent. They pointed to the empty loom, and the poor old minister opened his eyes wider and wider. He still could see nothing, for nothing was there. “Gracious” he thought. “Is it possible that I am stupid? I have never thought so. Am I unfit for my position? No one must know this. No, it will never do for me to say that I was unable to see the material.”

“You aren’t saying anything!” said one of the weavers.

“Oh, it is magnificent! The very best!” said the old minister, peering through his glasses. “This pattern and these colors! Yes, I’ll tell the emperor that I am very satisfied with it!”

“That makes us happy!” said the two weavers, and they called the colors and the unusual pattern by name. The old minister listened closely so that he would be able say the same things when he reported back to the emperor, and that is exactly what he did.

The swindlers now asked for more money, more silk, and more gold, all of which they hid away. Then they continued to weave away as before on the empty looms.

The emperor sent other officials as well to observe the weavers’ progress. They too were startled when they saw nothing, and they too reported back to him how wonderful the material was, advising him to have it made into clothes that he could wear in a grand procession. The entire city was alive in praise of the cloth. “Magnifique! Excellent!” they said, in all languages. The emperor awarded the swindlers with medals of honor, bestowing on each of them the title Lord Weaver.

The swindlers stayed up the entire night before the procession was to take place, burning more than sixteen candles. Everyone could see that they were in a great rush to finish the emperor’s new clothes. They pretended to take the material from the looms. They cut in the air with large scissors. They sewed with needles but without any thread. Finally they announced, “Behold! The clothes are finished!”

The emperor came to them with his most distinguished cavaliers. The two swindlers raised their arms as though they were holding something and said, “Just look at these trousers! Here is the jacket! This is the cloak!” and so forth. “They are as light as spider webs! You might think that you didn’t have a thing on, but that is the good thing about them.”

“Yes,” said the cavaliers, but they couldn’t see a thing, because of course, nothing was there.

“Would his imperial majesty, if it please his grace, kindly remove his clothes.” said the swindlers. “Then we will fit you with the new ones, here in front of the large mirror.”

The emperor took off all his clothes, and the swindlers pretended to dress him, piece by piece, with the new ones that were to be fitted. They took hold of his waist and pretended to tie something about him. It was the train. Then the emperor turned and looked into the mirror.

“Goodness, they suit you well! What a wonderful fit!” they all said. “What a pattern! What colors! Such luxurious clothes!”

“The canopy to be carried above your majesty awaits outside,” said the grandmaster of ceremonies.

“Yes, I am ready!” said the emperor. “Don’t they fit well?” He turned once again toward the mirror, because it had to appear as though he were admiring himself in all his glory.

The chamberlains who were to carry the train held their hands just above the floor as if they were picking up the train. As they walked they pretended to hold the train high, for they could not let anyone notice that they could see nothing. 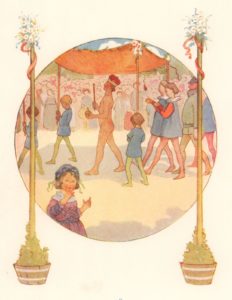 The emperor walked beneath the beautiful canopy in the procession, and all the people in the street and in their windows said, “Goodness, the emperor’s new clothes are incomparable! What a beautiful train on his jacket. What a perfect fit!” No one wanted it to be noticed that he could see nothing, for then it would be said that he was unfit for his position or that he was stupid. None of the emperor’s clothes had ever before received such praise.

“But he doesn’t have anything on!” said a small child.

“Good Lord, let us hear the voice of an innocent child!” said the father, and whispered to another what the child had said.

“A small child said that he doesn’t have anything on!”

Finally everyone was saying, “He doesn’t have anything on!”

The emperor shuddered, for he knew that they were right, but he thought, “The procession must go on!” He carried himself even more proudly, and the chamberlains walked along behind carrying the train that wasn’t there.

When my sons were young, from about age 8 on, I or their dad often told them this story. When they were little, we said nothing–no comment. But as they got older, as they themselves began to understand the message in this story (which is by Hans Christian Andersen), we would talk about it. We would talk about occasions when a grown up person–or a group of people–didn’t have any clothes on and what a wonderful thing it is to be the one to name that situation. We talked about courage.

As they grew into their teens and both became aware of the injustices and cruelties of the world, this story came back again and again: they had learned its central message. They had the courage to think their own thoughts, to not be swayed by the mob (read: corporate media), and most critically, to be able to stand in their truth and name it. They had the courage to speak out what they knew.

The absolute bedrock of anthroposophy–that which informs and support Waldorf education–is the sanctity of human freedom. As conscious adults, we must be free to make our own lives, to think our own thoughts and to take responsibility for our deeds, including our mistakes. Relationships are a part of that–and the tussle and pain and joy of human relationships is the crucible in which we learn to be human as we incarnate on this earth. Only through full and free discourse can we come to decisions which might involve sacrifice, which might be uncomfortable or inconvenient. But when the information we need is held tightly by vested interests or surrounded and obscured by lies and when people are herded about like cattle, then the possibility to have such free dialogue which can lead to meaningful decisions is lost.

Our children are not able to make decisions about their own lives yet–as they grow into their teens, that certainly becomes part of appropriate parenting and education. But right now, when they are young, they need to have the templates of adult freedom from which to learn.

In this time of global crisis and unprecedented government control, are we able to stand in our own individual template of freedom from which our children take inspiration and plant the seeds toward their own self directed freedom? Or do we cave in, fearful to name the fact that the Emperor (or Council of Emperors) do indeed have no clothes.

Posted on May 21, 2020 in Anthroposophy, Family Life and Parenting