Christopherus Homeschool Resources was founded in 2003 by Donna Simmons and Paul Newton.

Donna has had a lifelong involvement in Waldorf education. This began when she was 4 and was sent to the Rudolf Steiner School in New York City. Fourteen years later she graduated and attended Sarah Lawrence College where she studied history, creative writing, political science and child psychology. She did independent research comparing the work of Piaget and Rudolf Steiner. 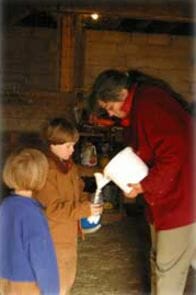 Eventually she wound up in the UK and spent a number of years working on city farms and other youth projects. She discovered how valuable her Waldorf education had been in providing her with insights into children and found herself bringing elements of Waldorf education to a diverse group of children and teens in London’s East End.

Later, she taught at the Sheffield Steiner School but came home once baby Daniel arrived. She continued to support Waldorf education by opening a mother-baby parenting group in her living room for potential parents of the Sheffield school. This later grew into the Merlin Nursery which was originally for 3 and 4 year olds but ceased taking on such young children when Donna saw how problematic this was for them. Donna continued working with parents via Waldorf early years education groups for a number of years. Donna trained with Brien Masters at the London Waldorf Teacher Training course and was mentored in Early Years work by Judith Chamberlain.

Over the next decade and a half Donna and Paul (who was acquired some years before their sons were born…) lived in several intentional communities, looking for ways that Donna could combine working with children with parenting her own children. They spent several years in a Camphill community in Britain and then in a Camphill-influenced community in Wisconsin. Here Donna led education programs for families, homeschoolers, Waldorf classes and teen groups. Donna also later worked weekends in a Group Home for delinquent teenage girls for a time.

By now Donna was homeschooling her sons. During the years of their grade school educations, they were mainly homeschooled – but for short periods of time they also attended Waldorf schools, both in the UK and in the US. However, for a variety of reasons, Donna and Paul felt that homeschooling was ideal for their boys.

Donna articulated her desire to create resources for homeschoolers after meeting Waldorf homeschoolers who were tying themselves up into knots trying to create little Waldorf schools at home and who were frustrated by the beautiful but often inaccessible materials then available. In addition, Donna was also appalled by the often trivial and ugly materials written by and for conventional homeschoolers. Thus Christopherus Homeschool Resources was born in 2003.

Since that time Donna has taught in a variety of settings including English classes for homeschooled children and teens and remedial one-on-one work with teens. She also taught part time at a Waldorf-inspired high school (English, history, social studies and other classes) and then taught other high school students via a local charter school. She has written all of the Christopherus publications and has held workshops around the US. Her blog and the Homeschool Journey newsletter reach thousands of Waldorf homeschoolers across the globe.

More recently, Donna has ‘homeschooled’ a group of children. She was also asked to be a guest teacher at Eurythmy Spring Valley, teaching Waldorf pedagogy to a class of eurythmy students.

Donna has been a member of the Anthroposophical Society for over 25 years and is dedicated to working closely with the spiritual scientific foundations of Waldorf education.She describes herself as a Christian, a libertarian socialist, and an anthroposophist. She has grave concerns about artificial intelligence and the directions that big business and governments are taking by wholeheartedly embracing such technology with little or no public discussion. The roll-out of 5G technology with little or no public consultation is an example of this.

Meanwhile…husband Paul is now a priest of The Christian Community, Movement for Religious Renewal, the church inspired by the work of Rudolf Steiner. He is way too busy with that work to have much to do anymore with Christopherus, but lends the occasional hand and offers feedback as needed! His work too  involves exploring how one can preserve and nurture the spiritual reality of the human being in our materialistic, consumerist and dark, dark world.