Debi in California sent us the following from her daughter Sara’s work – note the progression to lower case letters by the end of the year.

And here are two watercolor paintings by Sara: “one color exploration from beginning of year, and the other is a spring picture with tree and daffodils.”

The following work was sent to us by Rebecca in Virginia, who comments:

I’m sending two examples of handwriting practice (letters M and V). I wrote the first lines, and Mara copied them underneath. We’ve just started working with her copying from the board with mixed (and slanty) results.

The rest are math drawings: one of Minnie Minus, the Enki subtraction character, one of the four seasons for the number four, and one math story that we drew out and solved – our first time working with all four processes in one story where we actually went through the problem on paper and used vertical “houses” instead of horizontal figuring.

Rebecca also sent a photo of the Math Gnomes which she felted for her daughter:

They’re so cute (if I do say so myself and I do LOL) and very easy to make. I took a pipe cleaner and bent it into a frame, then needle-felted plain sheep’s wool onto it. Then I took fleece in the corresponding colors and felted that on with the needle. Finally, I took a bit of yarn that was darker than the fleece and felted the gnome’s sign onto its hat or belly. They turned out really nicely, and it gave us something concrete to use when we were doing our stories. I used some of the Enki stories, some of the stories out of Dorothy Harrer’s Math for the Elementary Grades, and then just made up stories using our now familiar characters–those were especially popular in the car. You don’t know joy until you hear your daughter saying, ‘Mommy, can you turn off the radio and tell me a Max Multiply story please?” 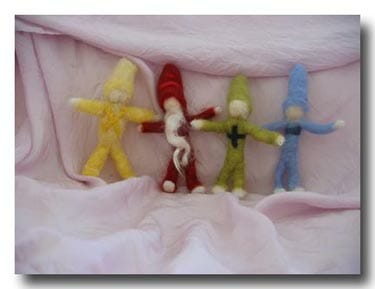 Back to First Grade Gallery

Orders can be placed and will be fulfilled after the break.