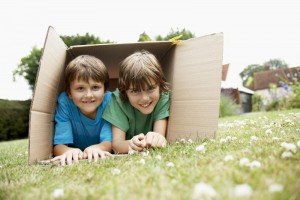 Although most young children – and many older ones – will be attracted to flashing, noisy toys, with care and forethought, one can create a family culture whereby the values of what is true, beautiful and good are embodied in one’s home.The cop-out refrain of ‘but he wanted this’ are valid insofar as yes, a child, being a child, does not possess the ability to stand back and truly determine at all times what is in her best interest (are we as adults always able to do this?!) but if we take the time to hear behind the child’s words and see behind the child’s actions, we can indeed see that more often than not, inappropriate toys are not what a child truly wants. Just as a diet based on sugar and junk food will not enhance the child’s health, something that those who take the time to develop real insight into observation of children can clearly see, so too do toys which are not life-affirming have a detrimental effect on a child. The quality of play, the general contentedness and amiability of the child, and the real satisfaction gained from open ended toys which let a child be free are readily observable in children who have access to such things.

Open-ended toys are not necessarily expensive, not necessarily handmade, not necessarily imported from Germany….Cardboard boxes are one of the best toys available, as are things found in Nature such as pine cones, smooth stones, and similar. Add a good supply of wooden planks of different lengths and off-cuts for indoor and outdoor play and a stock of odd scarves, hats and lengths of cloth from a second-hand shop, and a child has all that they need at a price anyone can afford.

Having too many toys can be as negative as having inappropriate toys. If there is one mantra that every parent would do well to at least consider as she is thinking about the needs of her child, it is ‘less is better’. Addictive behaviours, those that at some point can  sometimes be diagnosed within the OCD or even autistic range, are often accidently created in a child with the best of intentions. Of course there are children who, no matter how they are parented, display addictive behaviours – but in my 30+ years of working with children I have too often seen such things created. Organic disorders do not suddenly right themselves when a mother or father decides to alter how they parent! Creating and then feeding a ‘more, more, more’ attitude and expectation is one of the most damaging things we can do as a parent. But in a society which values ‘more is better’ and challenges us to shop our way to happiness, it can be a very hard lesson for a parent to learn, and one that is not widely supported. (Do have a listen to our free audio download on ‘Therapeutic Waldorf’ for more on this).

One mustn’t overlook, of course, the fact that children can play very creatively with the most inappropriate things. Children the world over make do with whatever odds and ends they can find, if they are poor, or with the expensive gadgets and gizmos they are given if they are rich. Those children whose innate creativity has not been deadened by being overwhelmed with too much stuff or muffled by the pain of poverty can come up with the most wonderfully inventive games with all sorts of things. Many years ago I used to run a wonderful online forum for Christopherus clients and one member shared how her daughters would take their barbie and Ken dolls and, depending on their age and what main lessons they were having, use the dolls to act out adventures of Native American myths, gods and goddesses, Amazons or whatever was living in them from the wealth of substance they were enriched by from the stories they were being told.

At the same time, children can also learn to discern the good, beautiful and true, and whether it is reflected in their surroundings or not. As my sons grew older, they would politely accept the hideously inappropriate gifts my mother would give them (you’d think after having sent me to a Waldorf school from age 4 – 18 she would have caught on at some point but clearly not!) and then set them aside where they would never be played with. Because of their environment and how we strove to bring them up, they could sense the disharmony between what nurtured their souls and what did not.

And surely this is what we are striving for – to raise children not to be so overly sensitive that they cannot tolerate plastic playthings or are snobbish in their attitudes. Rather, the point is to raise children who become adults who can discern between what is good, beautiful and true and that which is not – and be able to use this in their inner compass to navigate and make sense of what they encounter in the world. A soul which is enriched by being encouraged to explore through life-affirming experiences in childhood is one which will be strengthened to take whatever path calls them when it is time to go out into the world.