The Goal of Waldorf Education

One of the most important and attractive elements of the Waldorf curriculum is the way children are led through an exploration of subject matter in an ever-deepening way. In accordance with her stage of development , the child experiences the world and learns through the body, through the feeling realm and then, when ripe, through thinking. One can discern a circling, weaving pattern, looping back, seemingly dropping the thread, picking it up again at a later time when the thread is no longer the same – but has metamorphosed into something quite new.

As soon as a child is born, she reaches out toward the world and, via the sheltering presence of the mother who mediates the sense experiences coming toward her, the child starts to learn about the world. This is not a conscious thought-filled kind of learning. This is a learning that occurs primarily through the child’s physical body and, most importantly, is filtered through the mother (or other always-present adult). In this way, the sensitive child is not bombarded with experiences, but has them ‘pre-digested’ as it were, from the parent.

Anyone who watches small children as they go about their surroundings knows that physical learning is what they crave and need. It speaks deeply to the developmental stage they are at. The child up until about 4 or 5 needs to use her senses – to touch everything for instance, no matter what! The rhythms of a healthy family life and the comforting repetition of tasks, songs and stories supports this crucial stage of child development, one that is misunderstood and totally under appreciated by our society.

During these early years, through play, the child builds foundations for understanding the world. Open ended exploration without adult agendas and expectations is vital for that first stage of childhood (birth through 7 years of age). The adult’s task is to create the warmth and support for the child to explore – and to have simple open ended playthings available to him to play with as he chooses. Especially after about 4 years of age, one can observe in a healthy child’s play how pots and pans become ships and trucks; sticks become bridges and magic wands; cardboard boxes become stables or houses or cars. The qualities of experimentation and fluidity of thinking are built upon such foundations. Adults would do best to avoid bringing the child out of this consciousness by asking questions, by naming things, by demanding (never mind how kindly!) what it is that the child is doing. This is inner work – and when it needs to be shared, the child will! 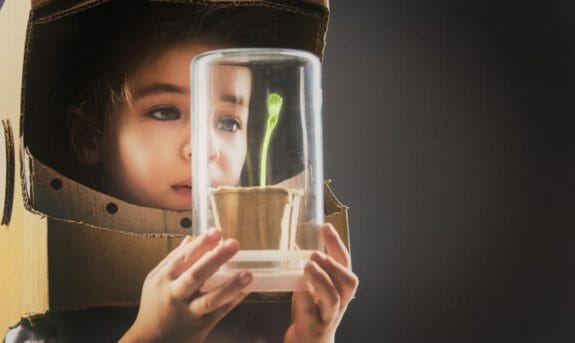 During these early explorations, scientific knowledge is first accrued. All things fall down; balls roll and then stop until I roll them again; stoves and candles are hot; some things float on water; and so on. Such knowledge, when learned through play, is the deepest kind of knowledge because it becomes part of one’s life experience. It is not merely something that one knows factually – it is something one knows bodily.

As children pass into the second stage of childhood (age 7 to 14) the body knowledge from earlier years is now approached though the artistic realm. The child knows because he has done it, that red and blue make purple. But now, at age 8 or 10 or 12, he feels within him the lawfulness of this experience and how color works on his soul. Color is not merely a phenomenon having to do with measurable light waves – that may be how it manifests in the physical world and so is in part true – but it is only part of the picture. Color is something which works on our souls. There is a reason why Goths wear black and why color therapy is an important science and art!

The experiences the child had through his body in the first stage of childhood are now deepened and transformed in the second stage. Color does not only do nice things when I use my brush – it also has an effect on me and other people. Using color – in drawing and painting – helps a child learn about the world – and to know that an artistic approach to, for instance, science, is as valid in its way as a phenomenological approach. A child who has to painstakingly draw her observations of things burned in a fire learns more about what has transpired than a child who merely reads that different materials leave different kind of ash when they are burned.

Eventually, as the child – now youth – enters the last stage of (dare I say it?!) childhood, he is ready to think clearly about the phenomena he knows through his thinking and feeling life. It is certainly not the case that little children don’t think – but the kind of thinking they do, the nonlinear, circular kind of thinking that is the hallmark of young children, is now rightly joined by a new capacity, linear, logical thinking.

Unfortunately, in our society, this is the only kind of thinking that is really appreciated. People may talk about ‘creativity’ but that either gets ring-fenced off as the province of ‘artists’ or it is simply tolerated as an interesting sideline until one gets to the real business of logical thinking. Unfortunately, as well, logical linear thinking that is not enlivened with feelings and grounded in the physical body, lead nowhere. The physical body is the seat of the will forces and if what one thinks has no relationship to this part of human experience, thoughts do not become grounded and do not bear fruit.

When a child is educated so that all parts of her being – her physical, feeling, and thinking sheaths – are given their due attention and at the right time and in a way that respects her development, then that child is in a good position to become a well-balanced and healthy adult. And that is the goal of Waldorf education.

Blessings on your homeschool journey,

Posted on March 4, 2017 in Family Life and Parenting, Waldorf Education