a story of St Nicholas 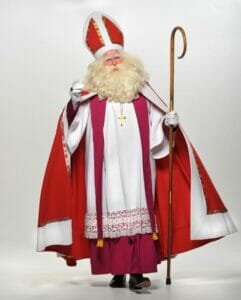 St Nicholas’ day has passed (6 December) but this is a lovely story to share with your children. It was written by a Christian Community (the church inspired by the work of Steiner) priest. May it be received with love and peace into your children’s hearts.

Dear children! I come from a kingdom where the sun never sets. In this kingdom, there lives a powerful king who has a great treasury in his golden castle. In this treasury, however, he does not keep his gold coins or pearls and precious stones; no, there he keeps golden seeds, small seeds in rich fullness. These he keeps and shelters in the treasury in his golden castle.

The King’s subjects dwell far and wide in his great kingdom. Anyone who is prepared to faithfully accomplish a task can be a subject of the powerful King. Whatever their profession, carpenter or baker, blacksmith or merchant, teacher, or doctor, they may plant a field in the protection of his house, the King’s cornfield. It does not need to be a large field, just so that he can take good care of it. The field must be plowed over in the autumn, and all the stones and weeds removed. It must be harrowed and straight furrows made. When this is done, the mighty King sends out his messengers, who go around the land, checking that the fields are well prepared, and in the furrows, they sow golden seeds from the mighty King’s treasury. Then they cover the furrows with earth, so the seeds may rest in darkness and warmth during the winter. When spring comes, the seeds begin to sprout. Now the people have to take care that curious animals do not nibble off the young tips. When the grain becomes stronger, they have to pay attention to wind and weather so that the young grain finds sufficient water and light but does not suffer from storms or fire. For no one may reap from this grain except to relieve another’s distress. Yes, no one may even look at the ripening grain with a demeaning look and say, “Well, mine has ripened much better than next door — the stalks are much stronger, the grain much thicker!”

Whoever does so may be sure that their field will dry up overnight, and all their bountiful harvest is lost. On the other hand, it is permitted to help another person who is somewhat clumsy in tending the grain entrusted to them so that it can flourish better, find better protection from storms, receive more sunshine, and be watered more abundantly. People who know that kingdom say that there is nothing better to do for the grain in one’s own field than to help one’s neighbor as best as possible. As if by magic, the grain behind one’s own house grows more vigorously.

When autumn comes, the great King sends out his reapers. They wander from place to place with their silver sickles, from house to house. Then everywhere in the kingdom, one soon hears the silver sickles sing in the cornfields, hears the ripe sheaves rustle and fall. And everywhere in the fields, one sees it glittering and shining brightly when the reapers shake out the ripe grains of gold from the ears, filling bright silk sacks and carrying them off on their shoulders into the treasury in the mighty King’s golden castle. Thus they are seen returning home throughout the land: Those who could reap only a little stooped as if under a heavy load, but those on whose shoulders rest full, round sacks of grain, walk upright and light-footed.

Near and far in that realm, the plowing and furrowing begin again so that new seed can be received from the King’s treasury.

But in the golden castle of the King is a festival day. All the castle inhabitants hurry together to rejoice in the golden shine and fullness of the harvest. On that holiday, they eat freshly prepared bread from freshly ground grain, one slice each — this is the only meal known in the golden King’s castle.

Do you know where the mighty King’s golden castle is? And do you know who his subjects are and where they work in the King’s cornfields? The golden castle is heaven. Our dear Lord himself is the mighty King. His subjects are the people who live on the earth, for the earth is his kingdom. But the King’s grain fields, in which he scatters the golden seed from his treasury every year, these fields are human hearts — your heart and yours — and into them, the good seed of heaven is sown. But what is the grain that ripens in hearts? It is good thoughts and pious prayers, helping deeds, and kind words. They can become even stronger when without hatred and resentment, but also without vanity and pride, they help others to be good and to do good. Then a rich harvest ripens in people’s hearts, the grain fields of the King and his reapers can properly fill their bright silk sacks. Then there is good, hearty bread to eat in heaven, a meal that can strengthen the angels and our dear Lord in everything they do for us.

I, Nicholas, too, am one of the messengers of God, sent to look after your hearts and to sow golden seeds from the mighty King’s treasury. But where I find the cornfields of the King well prepared, there I may also give what people here on earth like to eat on this holiday and what will strengthen your joy in cultivating the fields in your hearts.

Posted on December 9, 2022 in Seasons and Festivals